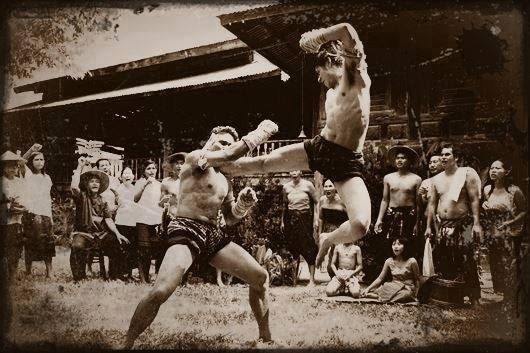 Ever seen Ong-Bak? Yes, the action flick that landed Tony Jaa onto the big screen and made him a household name. Ever wondered which fighting style it is that he uses in the movie? If you’re a martial arts enthusiast like I am, then you probably know what I’m talking about. The ancient Thai form of fighting known as ‘Muay Thai.’ Today, we’re going to take a deep dive into the muay thai history and explore this vibrant art form.

What is Muay Thai?

Muay Thai, or its literal English translation, ‘That Boxing,’ is an ancient Thai fighting style that utilizes the user’s entire body as a weapon, mimicking war weapons. Developed hundreds of years ago, it’s an indispensable part of the Thai culture as well as their National sport.

Regarded as one of the most lethal combat sports, it’s also widely known as “the art of eight limbs,” It utilizes the fists, elbows, knees, and shins as tools for striking and grappling.

Much of muay thai history today is widely debated by scholars, reportedly due to a significant portion of its history having been lost during the Burmese invasion of Thailand back in the 14th century. The scriptures and volumes that were saved are today preserved as a token of Thai culture.

Today, Muay Thai is a respected and revered combat form that draws enthusiasts from all around the globe. Made famous by mainstream movies like the Ong-Bak series and stars like Tony Jaa, the art form is here. A great muay thai history aside has yet to lose its charm, especially among the people of Thailand who flock to matches and television broadcasts. With an increasing number of spectators and its utility as a form of self-defense and a fitness program, Muay Thai is consistently proving to the world that it is an honor to be a Muay Thai warrior.